No more syringe-pens, Rejected from Hell Presidents or Osama welcomings. Hell pizza decided to talk about their pizza this time, and their promo is Pizza roulette.

“It doesn’t cost. But someone pays,” their slogan warns. To play their deadly Pizza Roulette, you just say the word and they’ll put two drops of the “hottest chili known to mankind” atop one slice. Just for some perspective, this sauce has “the same kick as police pepper spray” and is 1,000 times stronger than a jalapeño pepper.

It could make for a particularly cruel joke birthday present or a sneaky way to get back at a nemesis, or just a new way to spice up your nights in. Their disclaimer cautions that the pizza chain will not be responsible for “loss of mental faculties, emotional damage, eye bulge,” as well as alien abduction, muffin tops, mermaid tail, the weather and bank fees, among other things.

Hell Pizza shot a video with the Wellington Firebirds cricket team to demonstrate the spicy factor, and the result is no joke. However, it does seem more manageable than Cluck U/University Chicken’s infamous 911 Challenge, where participants must sign a waiver before eating the 911 sauce-laden wings that are sure to leave them feeling sick for days afterward. 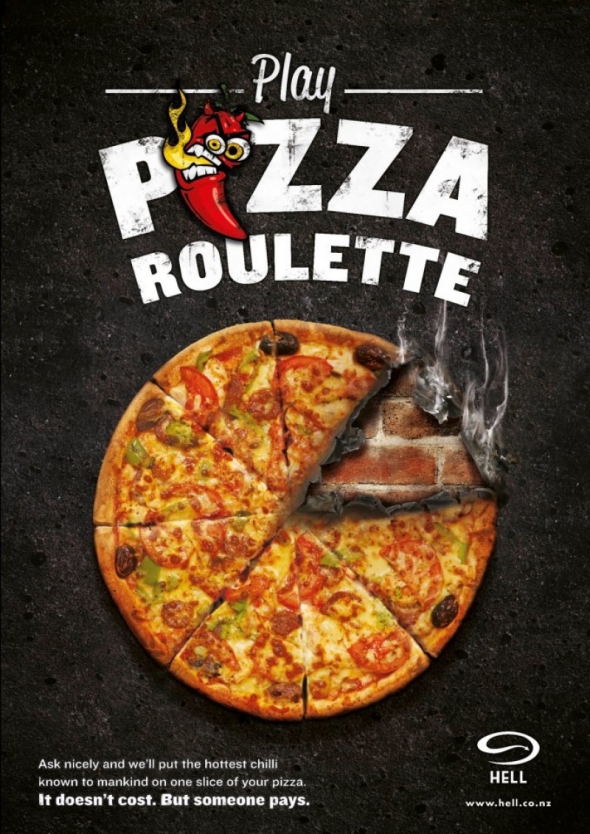