Give Yourself Permission to Suck: It’s The Only Way to Learn

You’ve heard the refrain before: In order to master something, you have to start first, and starting involves being bad at it for a while. Author David Kadavy reminds us that it’s okay to suck at what you do, even if you’re been doing it for a while. Give yourself permissions to suck—if you don’t, you’ll never improve.

In order to be good at anything, you have to suck first, but it’s very tempting to give up and just stop when you realize you suck. You may have heard Ira Glass‘s advice for beginners, seen in the video above and also retold here at Zen Pencils, but the message is the same: if you think you can’t do something, it’s not just possible, it’s probably likely that you just need to keep working to get through the barrier of suckage before you’re any good. Even then, once you’re good, you probably still suck a bit, and that’s okay.

Most people don’t give themselves permission to suck. They think that there are people who are great at things (and are notable for being great at those things), and then there is them: ordinary person – and all of the ordinary people around them.

If they start trying to do something, their ordinary person friends try to push them down “why are you doing that?” “What a waste of time!” “Why don’t you just watch sitcoms and scan Facebook with your free time, fellow ordinary person?”

Unfortunately, most people give in. They can’t stand to suck.

He reminds us that there’s nothing wrong with being bad at something, especially if it’s part of the process you use to learn, grow, and get better. No one is ever a master at anything the first time they try it, even if they have a talent for it. At the end of the day, doing things you’re not that great at—but wish you were—eventually leads you to being better at them, obviously, but more importantly it can be fun and rewarding in itself to master something you’ve always wanted to master.

Plus, the more frequently you make that climb from knowing nothing to knowing something, the easier it is the next time you want to try something new. So give yourself permission to suck, even if other people around you think you’re wasting your time. Learning a skill, like a language, or amateur astronomy, or how to fly a helicopter, are things that are hard and take time, and you’ll suck at them for a long while, but once you don’t suck anymore you’ll have your whole life to enjoy the benefits. 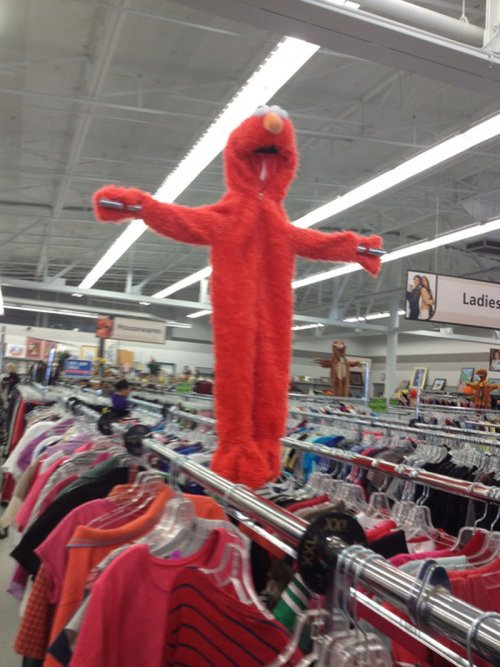 Let us not forget how Elmo died for this department store’s sins.

It’s like Martha Stewart always says: “Add a little color to any retail environment with the simple addition of a grotesquely murdered children’s character.” And if your kids ask why Elmo’s lifeless corpse has been splayed out above them like a hideous trophy (on the off-chance they’re able to do anything but stare up at him in silent, mouth-gaping horror), tell them he was caught stealing. Sure they’ll need years of intensive therapy before they’re able to form words again, but they’ve learned a valuable lesson about honesty.