A Holiday Message from Ricky Gervais: Why I’m a good Christian. 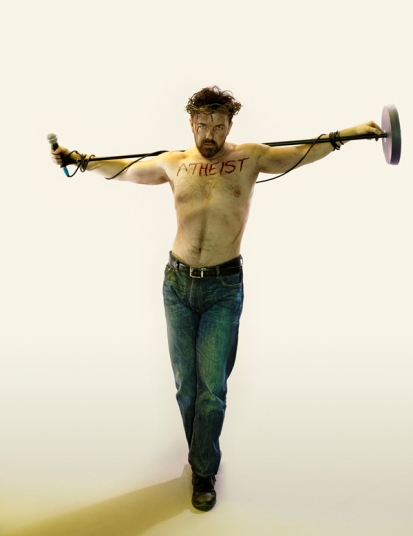 The title of this one is a little misleading, or at least cryptic. I am of course not a good Christian in the sense that I believe that Jesus was half man, half God, but I do believe I am a good Christian compared to a lot of Christians.

It’s not that I don’t believe that the teachings of Jesus wouldn’t make this a better world if they were followed. It’s just that they are rarely followed.

I have always felt this way, even when I believed in God, and in a weird way I feel I am still a pretty good “Christian” who doesn’t believe in God.

So many Christians think that because they believe in the right God, they are automatically good and have a one-way ticket to everlasting life. Dare I say it but I suspect this is their main reason for believing. I’ve heard so many “believers” say, “Well, since there is no way of being sure whether there is a God or not, it’s better to believe in God than not, because that way, if you’re wrong it doesn’t matter and if you’re right you get everlasting life.” Win:win.

This is of course Pascal’s Wager, which assumes that God if he exists would reward blind faith above logic and living a good life as an atheist.

To the Christians’ God by the way, it’s just as bad to believe in the wrong God as no God at all. The idea of other Gods is of course ridiculous to Christians. Supernatural poppycock. As if there was ever a Zeus; stupid, ancient, unenlightened superstition. And even if there are other Gods (which of course there aren’t) then the Christians’ God is the best. Hardest, smartest… just better. He would laugh at Zeus and call him a Greek bender. (I doubt that God is racist and homophobic but the Bible isn’t clear. Some bits go on about love and equality and others say you shouldn’t trust certain types and that laying down with a man as you would with a woman is punishable by death and is a bit sick and evil.)

So remember. If you are gay you are “Bumming for Satan” basically. (That would make quite a good T-shirt.)

Jesus was a man. (And if you forget all that rubbish about being half God, and believe the non-supernatural acts accredited to him, he was a man whose wise words many other men would still follow.) His message was usually one of forgiveness and kindness. These are wonderful virtues but I have seen them discarded by many so-called God-fearers when it suits them. They cherry pick from their “rulebook” basically. I have seen such cruelty and prejudice performed in the name of Christianity (and many other religions for that matter) that it makes me wonder if there has been a bit too much selective reading and reinterpretation of the doctrines.

God or not, if I could change one thing for a better world, it would be for all mankind to adhere to this little gem: “Let he who is without sin cast the first stone.” I assure you, no more stones would ever be thrown.

So maybe we should go back to basics to find out where it all got confused.

Not bad for an atheist.

How did you do?

Even if this doesn’t prove I am a good Christian it does prove that the Bible is a bit inconsistent, open to interpretation, and a little intolerant.