Why You Hate Waiting In Line 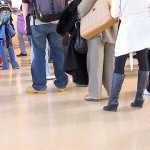 Most of us experienced the grueling boredom of waiting in a line. Not only are lines boring, they can also be aggravating, and stressful. The New York Times explains why we hate lines, and what we can do about them.

The basic idea is that when you’re unoccupied, the wait in a line feels longer. In fact, research suggests that people overestimate how long they’ve waited in a line by 36 percent. Those estimates are often based on expectation. The New York Times explains:

Our expectations further affect how we feel about lines. Uncertainty magnifies the stress of waiting, while feedback in the form of expected wait times and explanations for delays improves the tenor of the experience.

Oddly, our feelings about a line aren’t just based on expectations. Our perception of a line is often all about that final moment. If a line speeds up at the end, we remember the experience positively. If it slows down, we have a negative memory.

The other problem with waiting in lines is that we’re more likely to make impulse purchases when we’re bored. This is why supermarkets place tabloids, candy, and gum in the checkout lane.

Can you really do anything about lines? Not really, but the New York Times offers one final bit of advice for dealing with them:

The dominant cost of waiting is an emotional one: stress, boredom, that nagging sensation that one’s life is slipping away. The last thing we want to do with our dwindling leisure time is squander it in stasis. We’ll never eliminate lines altogether, but a better understanding of the psychology of waiting can help make those inevitable delays that inject themselves into our daily lives a touch more bearable. And when all else fails, bring a book.

If you find yourself getting peeved when you’re waiting in lines, the New York Times article is worth a read, even though you can rarely do anything about wait times.

Project Glass Is Google Goggles for Your Head

Today, Google offered a preview of Project Glass, their search giant’s augmented reality glasses. The video above shows a possible (probably best-case) reality of the glasses in action.

You may already know about or even use Google Goggles the app (which Lifehacker thinks is prettygood at a lot of things), and in theory, Project Glass is sort of the über Google Goggles. You don’t need to clumsily interact with your phone. Your eyes and voice do the all the interaction, but the use cases (making calls, sending texts, getting directions, responding to notifications, and so on) are very much like a smart phone you wear on your head.

Judging only by the video, we may very soon have a lot of weirdos walking around talking to themselves. Which frankly, we already have, and while I get the gut reaction that says “this is weird and will probably be annoying”, that’s the same reaction a lot of people had when the iPhone was released. (I can still remember feeling self-conscious about using my first-gen iPhone in public.) So let’s give it a chance! (Also, let’s ignore style issues for now. Some day we may be talking contact lenses, or at least something a little less conspicuous.)

No word yet on when the glasses will be available.