Give Yourself Permission to Suck: It’s The Only Way to Learn

You’ve heard the refrain before: In order to master something, you have to start first, and starting involves being bad at it for a while. Author David Kadavy reminds us that it’s okay to suck at what you do, even if you’re been doing it for a while. Give yourself permissions to suck—if you don’t, you’ll never improve.

In order to be good at anything, you have to suck first, but it’s very tempting to give up and just stop when you realize you suck. You may have heard Ira Glass‘s advice for beginners, seen in the video above and also retold here at Zen Pencils, but the message is the same: if you think you can’t do something, it’s not just possible, it’s probably likely that you just need to keep working to get through the barrier of suckage before you’re any good. Even then, once you’re good, you probably still suck a bit, and that’s okay.

Most people don’t give themselves permission to suck. They think that there are people who are great at things (and are notable for being great at those things), and then there is them: ordinary person – and all of the ordinary people around them.

If they start trying to do something, their ordinary person friends try to push them down “why are you doing that?” “What a waste of time!” “Why don’t you just watch sitcoms and scan Facebook with your free time, fellow ordinary person?”

Unfortunately, most people give in. They can’t stand to suck.

He reminds us that there’s nothing wrong with being bad at something, especially if it’s part of the process you use to learn, grow, and get better. No one is ever a master at anything the first time they try it, even if they have a talent for it. At the end of the day, doing things you’re not that great at—but wish you were—eventually leads you to being better at them, obviously, but more importantly it can be fun and rewarding in itself to master something you’ve always wanted to master.

Plus, the more frequently you make that climb from knowing nothing to knowing something, the easier it is the next time you want to try something new. So give yourself permission to suck, even if other people around you think you’re wasting your time. Learning a skill, like a language, or amateur astronomy, or how to fly a helicopter, are things that are hard and take time, and you’ll suck at them for a long while, but once you don’t suck anymore you’ll have your whole life to enjoy the benefits.

What You Can Learn from Your Professional Rivals 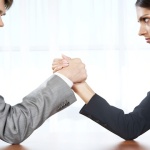 Professional rivalries often seem like the ultimate waste of time. Why is she spending so much time worrying about what someone else is doing? Why doesn’t she focus on her own business? Doesn’t she have anything better to do? It’s true that obsessing about a competitor isn’t the healthiest long-term activity. But I’ve also come to believe you can glean important lessons from the very act of rivalry – if you use it as an opportunity for growth, rather than just an opportunity to crush your enemies.

Where are you weak? Oftentimes, rivalry is a form of envy: your competitor has a trait or skill you (sometimes grudgingly) admire. That was the case when a friend – let’s call her Sara – reached out to me, asking if I was connected with a particular colleague on Facebook. “If so,” Sara wrote, “I want to discuss his social media presence with you.” It turned out Sara was livid about this guy’s frequent, self-promoting Facebook posts and wanted validation that our colleague was grossly misusing the network and ruining his personal brand. Unfortunately – to Sara’s astonishment – I hadn’t really noticed. I casually followed his exploits; only Sara was obsessed enough to be bothered. She was a shy, introverted entrepreneur who had long hesitated about promoting herself. Our colleague’s blatant self-promotion raised the uncomfortable specter Sara might have to start doing it, too. She felt much better after realizing it was OK to tackle social media in her own way, that didn’t feel phony or self-aggrandizing.

What do you value most? For years, I’d known a woman whom I was quite sure had fabricated her credentials. She cited ties to world-famous universities and institutions, but grew vague and evasive when asked about them. It was mildly annoying to see her at conferences, but my indignation grew to a fever pitch when she landed a book deal with a major publisher and began winning media attention. In an inspired move, I wrote to my friend Michael, who worked at one of the august institutions she claimed to be affiliated with, in hopes he might devise a clever way to “out” her. Instead, he wrote back with a question: “Why does she irk you?” I wrote back, defensive: It’s about justice! Fairness! Truth! But Michael was right. One’s rivals often poke at a tender spot. I worked hard for my degrees and credentials, never benefiting from family connections or other shortcuts. And perhaps, it seems, I’ve made a religion out of it, because the thought that someone could invent their résumé and get away with it makes me apoplectic. Knowing that bias helps me keep a better perspective (for instance, I may be liable to overvalue a job candidate who “made their own way in the world”).

Are you thinking big enough? At their worst, professional rivalries cause a form of myopia; you’re inventing products or launching initiatives to beat the competition, not to benefit the customer. That’s rarely the recipe for breakthrough innovation, as you focus on one-upmanship and incremental improvements. (Indeed, there’s speculation following Apple’s patent infringement victory against Samsung that smartphone makers may be forced into a new era of design creativity, now that the negative legal consequences of “following the leader” are so clear.) But occasionally, stalking a rival can unlock breakthrough possibilities for growth (think of the impact Roger Bannister shattering the four-minute mile had on his competitors). How can you increase your impact or make a new contribution in your field?

Professional rivalries can be a powerful vehicle for self-discovery – if you step back and think analytically about them. Learning where you’re weak, what values you cherish, and how to think big are important advantages. But even if you struggle to rise to that level of self-reflection when it comes to your rival, the blood-boiling effects of a competitor can sometimes be salubrious: if it kills me, I’m going to make sure my book outsells that of my veracity-challenged rival.

How have professional rivalries inspired or motivated you?

Dorie Clark is a strategy consultant who has worked with clients including Google, Yale University, and the National Park Service. She is the author of the forthcoming Reinventing You: Define Your Brand, Imagine Your Future (HBR Press 2013). Follow her on Twitter@dorieclark.

The Conscience of a Hacker – (A Hackers Manifesto)

Another one got caught today, it’s all over the papers. “Teenager Arrested in Computer Crime Scandal”, “Hacker Arrested after Bank Tampering”…

But did you, in your three-piece psychology and 1950’s technobrain, ever take a look behind the eyes of the hacker? Did you ever wonder what made him tick, what forces shaped him, what may have molded him?

I am a hacker, enter my world…

Mine is a world that begins with school… I’m smarter than most of the other kids, this crap they teach us bores me…

I’m in junior high or high school. I’ve listened to teachers explain for the fifteenth time how to reduce a fraction. I understand it. “No, Ms. Smith, I didn’t show my work. I did it in my head…”

I made a discovery today. I found a computer. Wait a second, this is cool. It does what I want it to. If it makes a mistake, it’s because I screwed it up. Not because it doesn’t like me… Or feels threatened by me.. Or thinks I’m a smart ass.. Or doesn’t like teaching and shouldn’t be here…

Damn kid. All he does is play games. They’re all alike.

And then it happened… a door opened to a world… rushing through the phone line like heroin through an addict’s veins, an electronic pulse is sent out, a refuge from the day-to-day incompetencies is sought… a board is found. “This is it… this is where I belong…” I know everyone here… even if I’ve never met them, never talked to them, may never hear from them again… I know you all…

You bet your ass we’re all alike… we’ve been spoon-fed baby food at school when we hungered for steak… the bits of meat that you did let slip through were pre-chewed and tasteless. We’ve been dominated by sadists, or ignored by the apathetic. The few that had something to teach found us willing pupils, but those few are like drops of water in the desert.

I am a hacker, and this is my manifesto. You may stop this individual, but you can’t stop us all… after all, we’re all alike.