How to Convince Someone You Work in Their Building.

There are fewer opportunities to put your social engineering skills to the test better than trying to convince someone you work at their establishment. Whether you just want to serve yourself a drink refill at a restaurant or you want to surprise your significant other with a birthday bouquet, here’s how to get in unnoticed.

If you walk around looking nervous and glancing from side to side, people will be able to tell that you don’t belong. Worse, they may approach you and ask questions. It may be unavoidable, but the most important thing to do if you’re trying to blend into any environment is to look like you belong there. That is, stand up straight, walk confidently like you know where you’re headed (even if you have no idea where this hallway will lead you,) and acknowledge people as they acknowledge you—the way you would in your own office or workplace.

This makes the other people around you subconsciously believe that you’re there for a reason. An old friend of mine who used to do penetration testing and physical security evaluations at large companies found that all too often she could find her way to the CEO’s office to hand-deliver her report just by walking around the building looking like she belonged there. 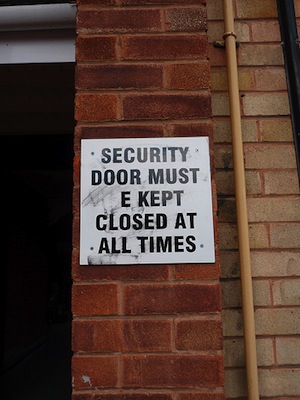 The best way to get into a building or office that you want access to is to go in behind someone else. Most people call it “tailgating,” and it’s a serious security issue for offices, apartment complexes, college dorms, anywhere with restricted access, but it’s your best friend here. Photo by Lydia.

It’s easy to slide up to the door when someone else is going in and grab it as it closes, to beg the person going in to hold it for you, or—more often—just walk through while the person just ahead of you walks in. Most of us would consider it rude to just slam a door to a building on someone or let an elevator close when someone is just a step behind us, especially if it’s a secure door where you would otherwise have to fumble for a keycard or other device to get in, so we do the nice thing and hold it open. You may have taken advantage of it on a day where you forgot your badge at work—you can do the same just about anywhere.

This part requires some familiarity with the place you’re going to visit, but no one is going to believe you work in an office where everyone is wearing shirts and ties if you walk in wearing a polo and jeans. Make sure you dress at or slightly above the dress code for the place you’re visiting. Fewer people will question a person wearing a button-down shirt and a slacks in an office full of polo shirts than will call out the guy wearing cutoff jean shorts and a t-shirt in the same office. It’s also important not to go too far over the dress code: you’ll stick out wearing a tie in an office where everyone wears t-shirts and jeans (although that can work to your advantage, as we’ll discuss later.) 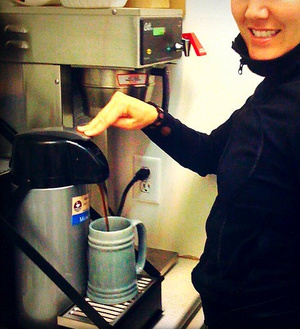 Be Ready for Questioning

Ideally, you’ll be able to slip into an office and get around to where you need to be without any questioning at all. However, if you’re overdressed, underdressed, or just unlucky enough to run into a curious employee, you need to be ready to deal with it. Photo by lululemon athletica.

If you’re overdressed compared to them, point out that you’re there on an interview and you’re just coming back from/going to get a cup of coffee. Alternatively, if the company you’re visiting has a large office or a whole building, say that you work in another office, or that you only started recently. If asked, “What do you do?” Respond that you work in a department almost every company has, like IT, or human resources. Whatever you say, make sure you have something in mind already. It shouldn’t be scripted, but you should have it ready to go.

If they buy it, ask for directions—you’ll be surprised how often you get them. If they’re not buying it, keep in mind some of these tips to subconsciously persuade people. Mirroring the person’s body language and movements will definitely make them feel at ease, and reciprocating their questions with your own will turn the attention away from you and make them think about how to respond. Ask them what they do and whose team they’re on. Ask them how that’s going, and if recent changes in your department have impacted them at all (note: this is an especially good trick if you claim to be in IT. Almost everyone will take the opportunity to talk or gripe to a new IT staffer about something.)

Not always, of course—grinning to yourself will make you stand out—but keeping a relatively upbeat and positive demeanor will make you stand out less than someone who’s hunched over, shifty-eyed, and ducking around corners wearing a Mission: Impossibleserious-face. People by nature avoid confrontation, and you can use this to your advantage by being confident, being positive, and engaging when appropriate.

This isn’t the movies: your goal is not to be so convincing that you could charm everyone, you just want to get in, surprise your fiancee in front of her coworkers, or drop off your boyfriend’s lunch without him or his coworkers knowing, and leave without attracting attention to yourself. Ultimately, you don’t want anyone to know someone who doesn’t belong was even there, even if you were right in front of their face.

This entry was posted on November 15, 2012 by Durdle. It was filed under Idiotic Crap and was tagged with Business casual, Casual, Clothing, Dress code, Dress shirt, Jeans, Shirt, Shopping, Spy Week.