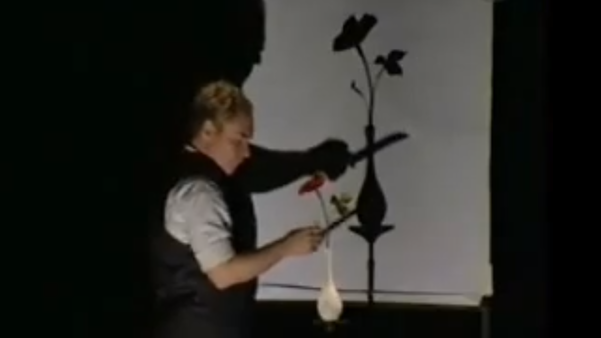 Teller, the silent half of the well-known magic duo Penn and Teller, has sued a rival magician for copying one of his most famous illusions. The case promises to test the boundaries of copyright law as it applies to magic tricks.

In “Shadows,” a spotlight casts a shadow of a rose onto a white screen. When Teller “cuts” the shadow on the screen with a knife, the corresponding parts of the flower fall to the floor.

A Dutch magician with the stage name Gerard Bakardy (real name: Gerard Dogge) saw Teller perform the trick in Las Vegas and developed his own version. Bakardy sells a kit—including a fake rose, instructions, and a DVD—for about $3,000. To promote the kits, he posted a video of his performance to YouTube and prepared a magazine ad. (With the video down, the link points to screenshots from the video filed by Teller in his lawsuit.)

Teller had Bakardy’s video removed with a DMCA takedown notice, then called Bakardy to demand that the magician stop using his routine. Teller offered to buy Bakardy out, but they were unable to agree on a price. So Teller sued Bakardy last week in a Nevada federal court.

Can you copyright a trick?

A fundamental principle of copyright law is that copyright covers the expression of ideas but not the ideas themselves. This puts the essential elements of the trick—the concept of rose petals falling when the shadow is “cut” and the technical details of how this effect is accomplished—outside the bounds of copyright protection.

So what’s left? According to New York Law School professor James Grimmelmann, copyright law protects pantomimes and choreographic works. So Teller may be able to claim the “Shadows” routine is protected under these categories. Teller describes “Shadows” as a “dramatic work.”

Still, Grimmelmann argues that “Teller has an uphill fight on his hands.” In a 2007 paper that became an instant classic, Jacob Loshin showed how magic thrives without significant protection from either copyright or patent law. Instead of relying on formal legal mechanisms, magicians derive benefit from their inventions through informal social norms that encourage magicians to give due credit to the original inventor of a particular trick.

This entry was posted on April 18, 2012 by Durdle. It was filed under Idiotic Crap and was tagged with Copyright, James Grimmelmann, Magic, New York Law School, Penn & Teller, Shadows, Teller, YouTube.