Stephen King Hates Twilight As Much As You Do! 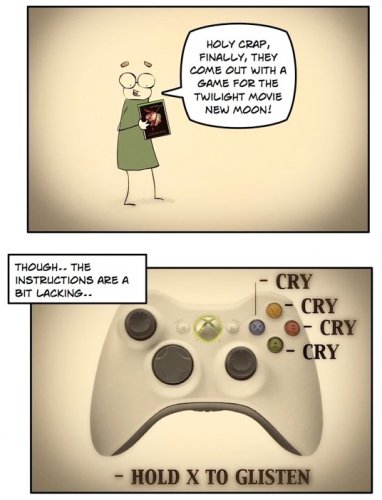 But it doesn’t matter. So long as there’s at least one scene where Robert Pattinson gets to suck his cheeks in and look away into the middle-distance, millions of teenage girls will snap Twilight up and spend the next few hours urinating themselves and sighing wistfully at the same time.

However, just because Twilight is critic-proof, it doesn’t mean that some critics aren’t having a go. Specifically Stephen King. Since he’s       a) “not 14”      b) not female c) is capable of rational thought, it’s no surprise that Stephen King isn’t a Twilight fan. But what might be a surprise is that he’s starting badmouthing Twilight’s author Stephenie Meyer in public. The Guardian reports:

King compared the Mormon author to JK Rowling, saying that both authors were “speaking directly to young people”. “The real difference is that Jo Rowling is a terrific writer and Stephenie Meyer can’t write worth a darn. She’s not very good,” he told an interviewer from USA Weekend.

What prompted Stephen King’s outburst? It could be jealousy – Stephenie Meyer’s books get turned into hopeless films that make millions of dollars, while Stephen King’s books get turned into hopeless films called The Mist that everyone ignores. It could be a generational thing – Stephen King remembers when he was the author of choice of creepy teenagers who smell like old towels, and he doesn’t like that someone else has taken his position. Or it could be that Stephenie Meyer actually is a terrible writer.

I really couldn’t say for sure. Because I’d need to read a Twilight book to find out, and I’m not mental.

This entry was posted on February 15, 2010 by Durdle. It was filed under Idiotic Crap .