There’s a new Japanese trailer for G.I. Joe: The Rise of Cobra making the rounds, and while it contains most of the same footage included in the previous trailer, this one does give us our first look at Cobra Commander (aka The Doctor), as played by Joseph Gordon-Levitt, in all his weird masked glory. In the screencap above, The Doctor is standing next to Destro (Christopher Eccleston) and the two are plotting to destroy the world and whatnot. 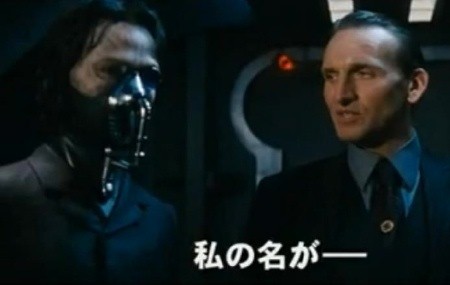 Perhaps it’s because this Japanese trailer cuts around a lot and doesn’t remain too long on any one scene that I’m digging it more than I did the domestic version. I think Paramount should just cut together a trailer featuring only Snake Eyes and Storm Shadow since those are easily the two coolest-looking characters, and their sword fight will most likely become a highlight of the film. I dunno … maybe this one will surprise us in some ways and let us down in others … but isn’t that what we’ve come to accept from all of these based-on-an-80s-toy-line-or-comic-book movies? G.I. Joe: The Rise of Cobra hits theaters on August 7.